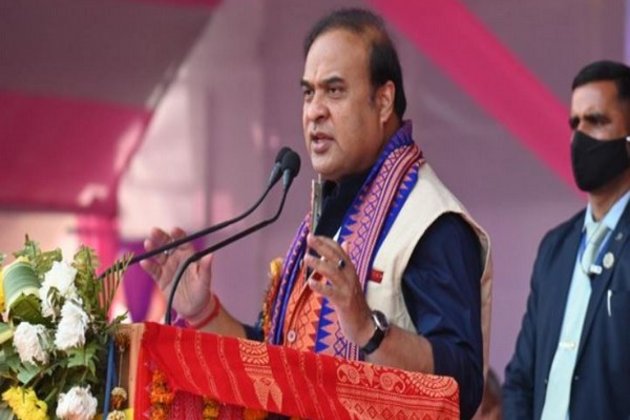 Dispur (Assam) [India], May 13 (ANI): Assam Chief Minister Himanta Biswa Sarma on Friday laid foundation stone for the construction of the "Guwahati Gateway Ghat" (ferry terminal) to be built at a cost of a whopping Rs 289 crore opposite the multi-level car parking at Fancy Bazar.

Assam Chief Minister on Friday dedicated a slew of services to the people of the state in a ceremony organised by the Transport department at the IWT Ghat near Fancy Bazar, informed CMO on Friday.

The Chief Minister stated that ever since taking over charge as the executive head of the state, bringing a marked change in the transport sector has been his top priority.

Speaking on the Guwahati Gateway Terminal, the Chief Minister stated: "There are such state-of-the-art terminals for sea transportation in the country but this project (Guwahati Gateway Ghat) will be the first-of-its-kind terminal to be commissioned on a river system. To be completed by LT within 24 months, this would ensure safe transportation of passengers in Guwahati and nearby Ghats during all seasons."He further added, "All modern amenities such as cafes, canteen, ramp, etc., to give the passengers a pleasant experience will be in place. We want to ensure that passengers and tourists here too have the same experience as passengers and tourists in countries such as Singapore and other foreign countries.""We are also about to embark on the construction of small modular terminals at places such as Dhubri, Bahari, among others, which will go a long way in improving the river transport system between various districts of the state," the Chief Minister said.

Flagging off the two steel-made catamaran ships as part of the government's plan to dedicate 20 such ships (of which 8 have already been commissioned and providing services at various Ghats of the state) to the people of the state aimed at overhaul of the river transport system, the Chief Minister exuded confidence these ships, equipped with the latest technologies will be able to significantly reduce river accidents and mishaps, while at the same time connecting the various Ghats of the state with one another.

"These (catamaran ships) are equipped with high-tech navigational gadgets and are designed so as to enable them to ply at the low draft. These ships, coupled with initiatives such as the (Guwahati) Gateway Terminal, will be a huge boost to the tourism sector in the state. I am confident our river transport system will be a witness to more such revolutionary changes in days to come," the Chief Minister said.

"It is a widely accepted fact now that modern transport system is a sine qua non for a robust tourism industry," Dr Sarma added.

On the occasion, the Chief Minister also launched 12 Aadhar-based contactless services for the people and another initiative called "CM-Trans", both related to the transport department.

Speaking on these, the Chief Minister exuded confidence these initiatives will contribute greatly to the elimination of middlemen from district transport offices.

"With the 12 online services (of transport department) and "CM-Trans" launched today, I am confident the menace of middlemen from the district transport offices will be dealt a severe blow. Along with greater transparency, these services will ensure efficiency in service delivery by the (transport) department," the Chief Minister stated.

He further added: "With the launch of the 12 services today plus those already launched last year, Assam is now providing 5 more services online than that is being provided by the Government of Delhi in the transport sector. This in itself is a manifestation of the resolve this government has towards the motto of "maximum governance, minimum government"."It is worth mentioning that "CM-Trans", developed by National Informatics Centre (NIC), is an automated system designed to allocate and disperse workloads between district transport offices with the aim of ensuring efficiency in services delivery. This apart, with increasing number of services delivered through efficiency, it would also be a source of higher revenue earnings for the government.

Flagging off 12 interceptor vehicles for the transport department, the Chief Minister said owing to tough measures taken by the government, there has been a remarkable decrease in the number of casualties from road accidents as compared to the figures two, and three years back.

He further urged the people of the state to adhere to the safety norms and regulations of the transport department.

The Chief Minister also revealed about plans to launch a ropeway service from Khanapara to Lokapriya Gopinath Bordoloi International Airport.

"Preliminary survey and research for this (the ropeway project) has been done. If all goes well, we will soon go ahead with this project."Transport Minister Chandra Mohan Patowary, addressing those present, lauded the Chief Minister for his visionary guidance in leading the transport department to newer heights.

"I would like to express my gratitude to the Chief Minister for guiding us with his able leadership in bringing about a revolution in the transport sector. As part of that revolution, the e-ticketing system in IWT has been able to generate Rs 2.5 crore of earnings. Moreover, a total of 7 lakh people last year benefited from the online services being provided by the transport department," the Transport Minister stated.

Today's event, apart from the Chief Minister and the Transport Minister, was also attended by Lok Sabha Member of Parliament Queen Ojha and senior officials of the government. (ANI)